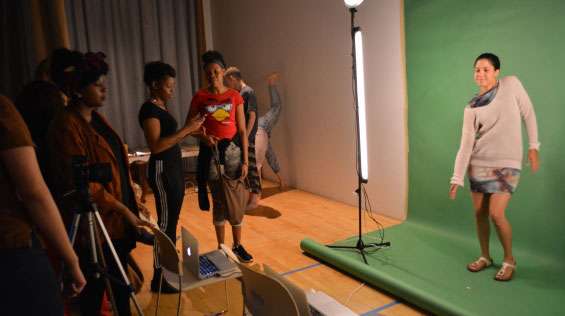 Presented as part of “AUNTSforcamera” and R&D Season: CHOREOGRAPHY.

An important interactive component of the installation of “AUNTSforcamera” at the New Museum includes a series of nine artist-devised tours, which have been organized using AUNTS’ chain-curation model. Nine artists have been invited by “AUNTSforcamera” artists to create a response to the exhibition in the form of a tour, which will be performed exclusively for and with participating audiences. Sable Elyse Smith was invited by collaborators Salome Asega, Chrybaby Cozie, and Ali Rosa-Salas.

Asega, Cozie, and Rosa-Salas’s Level Up: The Real Harlem Shake is an interactive video game utilizing hacked Kinect software in which users are rewarded for how closely they come to performing the original Harlem Shake, a dance that originated in Harlem and has been subsequently distorted by a recent YouTube meme. Smith’s tour for “AUNTSforcamera” responds to this work by drawing attention to remix culture. The audience will sample, refract, and refrain, thinking about the implications of cultural appropriation and creating scores of their own lived experiences. No one on the corner has swagger like us.

In keeping with the spirit of AUNTS, the currency of exchange for attending these tours is not monetary; instead visitors must provide proof of submission to #auntsforcamera, an interactive work by Karl Scholz included in the “AUNTSforcamera” exhibition. #auntsforcamera utilizes the downloadable app OchoVideo to record eight-second user-generated video clips to become part of a sequenced single-channel video installation (on view in the New Museum lobby) that accumulates over the course of the entire project from September 8, 2014, to February 15, 2015.