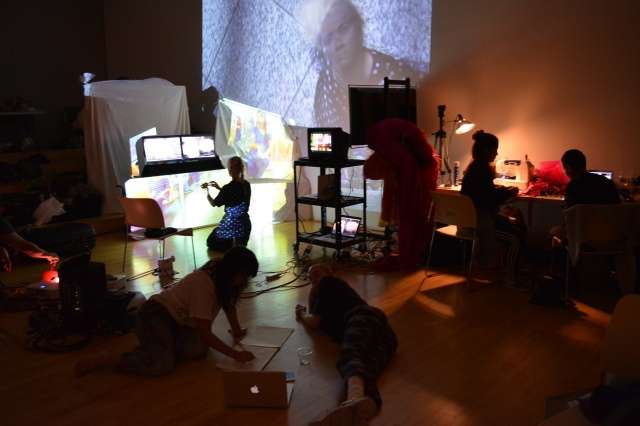 Opening Event: BYOC! (Bring Your Own Camera!—Where the Audience Controls the Frame)

A double performance event at the New Museum, New York and Trouw, Amsterdam.

DJ set and dance party from 7-9pm with Geo Wyeth (DJ Feeling$) and after party at Cafe Dancer.

BYOC! (Bring Your Own Camera!—Where the Audience Controls the Frame), coincides with the opening night party for the “AUNTSforcamera” exhibition at Trouw in Amsterdam and will be Livestreamed into the dance/art/club space at Trouw. Fifteen artists, including “AUNTSforcamera” participating artists, will create a live AUNTS event, offering a selection of short, long, and durational performances, arranged and coupled in different unrehearsed combinations. Visitors are free to move through BYOC!, engaging with as many or as few of its offerings as they like, choosing their own path through the event and creating their own experiences through chance encounters.

Throughout the event, visitors will be encouraged to film the performances via a livestream camera set up with 360-degree perspective in the middle of the New Museum Theater. Visitors are also encouraged to record and upload eight-second videos of the event via ocho, a social media application developed by Karl Scholz, one of the participating artists in “AUNTSforcamera.” By hashtagging eight-second clips to “#auntsforcamera”, visitor- and artist-produced videos will automatically become part of the footage exhibited in the “AUNTSforcamera” installation at Trouw and, later, the New Museum. The app can be downloaded here.

Featuring Performances at the New Museum by:

And performances via Livestream from TrouwAmsterdam:

Mayke van Kruchten in the work of Edan Gorlicki

And, if you are in Amsterdam, or know people there, come to Trouw!