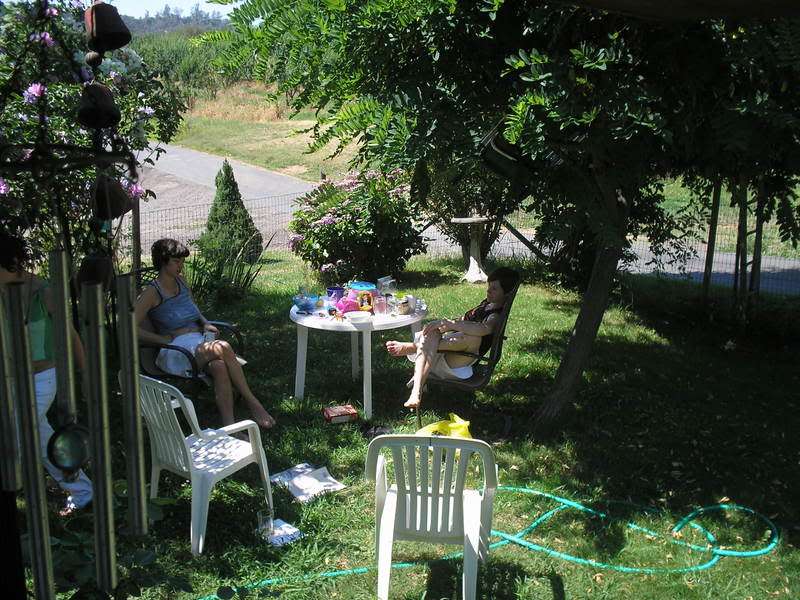 as part of the Movement Research Festival 2007

`Have some wine,’ the March Hare said in an encouraging tone. Alice looked all round the table, but there was nothing on it but tea. `I don’t see any wine,’ she remarked. `There isn’t any,’ said the March Hare.

Led by whoever shows up “twinkle twinkle tea party by AUNTS” is a real-time, garden tea party to talk about dance and performance in non-sequiturs, with rhetorical questions, frippery and complete inefficiency.

“Don’t be nervous or I’ll have you executed on the spot,” said the King to the Mad Hatter.

Texts that pertain to twinkle twinkle, but does not need to be read to attend the tea party can be found in the blogs of www.myspace.com/aunts.
—
AUNTS is about having dance happen. The dance you’ve already seen, that pops into your head, that is known and expected and unknown and unexpected. Dance that seeps into the cracks of street lights, subway commotion, magazine myth, drunk nights at the bar, the family album, and the couch where you lay and softly glance at the afternoon light coming in through the window. AUNTS constantly tests a model of producing dance/performance/parties. A model that supports the development of current, present, and contemporary dancing. A model that expects to be adopted, adapted, replicated, and perpetuated by any person who would like to use it. Where performing can last five seconds or five hours; never a “work in progress.” Where the work of performing is backed by the “land of plenty” rather than “there is not enough.” Where the work of AUNTS defies the regulation of institution, capitalism, and consumerism. AUNTS is about being gracious in this world. Thank you.
—
AUNTS
http://www.myspace.com/aunts
—
Movement Research Festival Spring 2007: Reverence (Irreverence) is the most recent incarnation of Movement Research’s annual festival. Initiated in 1992 as Improvisation Festival New York (IFNY) by Sondra Loring (an MR artist-in-residence at the time) and Julie Carr, the festival was turned over to Movement Research in 1999 under the curation of Program Director Amanda Loulaki. In 2004, the Festival’s structure and curatorial process shifted from a single-staff curated model to a curatorial team of artists, reflecting Movement Research’s mission of valuing artists, their creative process and vital role within society. Each year, the festival brings together a new group of artist curators that determine the emphasis, shape and program of the festival in collaboration with Movement Research staff, allowing for a more varied investigation and exploration into current artistic concerns.
—
MR Fest
movementresearch.org
myspace.com/mrfestival